Mr Lowry in the Dean Gardens

Well even I have to admit ‘The Boss’ has been chasing his tail a bit lately, but at last I have got him to sit down in the shade and write up another bit of my doings for the Garden Scheme; about time too I can hear ‘HQ’ noting as well. 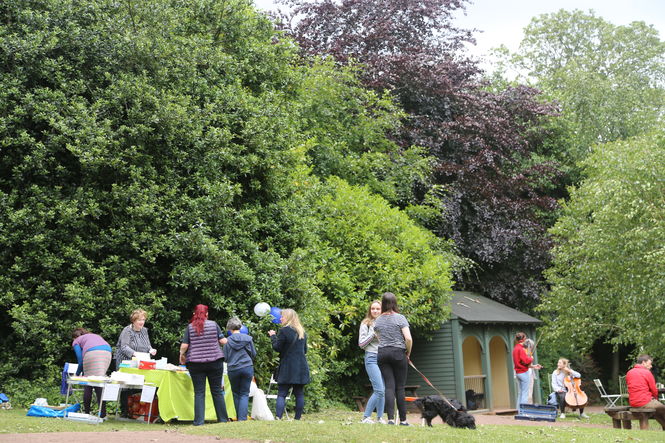 Glorious music and teas at the Dean Gardens ©

‘The Team’ like me thought that the Dean Gardens was a grand afternoon out, a must see in the middle of the city for another time if you missed it. Proper ‘Chill Time’ I heard ‘The Boss’ noting with a very nice cup of tea and ‘Stickies’, cakes to the uneducated all provided by the volunteers from St Columba’s Hospice. These were consumed by the ‘The Team’ as they sat on a bench whilst I lay on the cool grass; all of us enjoying the sound of the cello and the violin drifting on the afternoon air, the music being played by Freya Ruusicanen and Mia Scott both pupils from Broughton High School. They told us that they were going to continue training as professional musicians upon leaving school; we wish them well in the future. That was the ‘real deal guys’, thanks so much for all your efforts.

‘The Team’ like me thought that the Dean Gardens was a grand afternoon out, a must see in the middle of the city for another time if you missed it.

Returning to the garden I have to admit that even for me the rest over tea was very welcome having spent nearly an hour exploring the myriad of paths, which crisscross the garden and the slopes down towards the Water of Leith. The sound of the river and cool shade of the trees at the base of the garden provides a lovely contrast to the architecture of the bridge and the many houses both period and modern which sit so well in the landscape along the opposite slope, some of which directly overlook the weir.

‘The Boss’ was chattering on about the garden having a strong ‘Sense of Place’ and a gracious feel which was slightly Robinsonian, he is such a romantic at heart but don’t tell him I said so! He also spoke about the mixture of exotics such as Chusan Palm, Hummingbird Fuchsia, Monkey Puzzle, Mock Orange, Spotted Laurel as well as native ferns, foxgloves, holly, bird cherry, large leaved limes and alder. After this I posed willingly for my photo in front of a lovely grouping of Skimmia japonica covered in red fruits and Rodgersia pinnata with its white candyfloss like flowers (see below). I have to say the drifts of humble buttercups and the cow parsley took my eye especially as they provided welcome splashes of yellow and white in the deep shade. I often think that we are much too tidy and fastidious in our gardens; give the wild flowers a chance and leave the nettles where you can for the butterflies. The boss is muttering that he whole-heartedly agrees with me on that front which is good, maybe I will get a salmon treat for being so in tune with him, lets hope so. 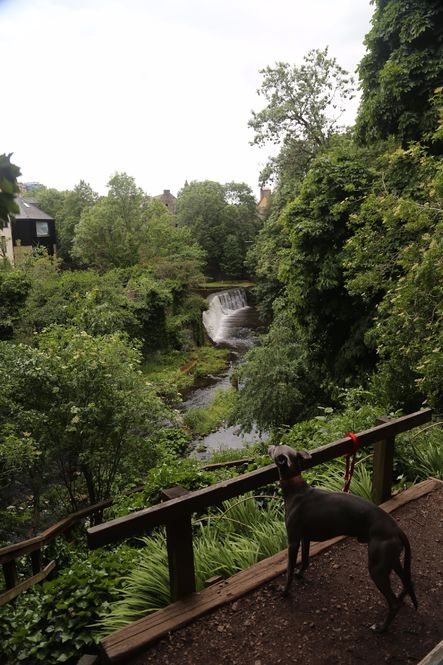 Mr Lowry admiring the view down the Dean river © 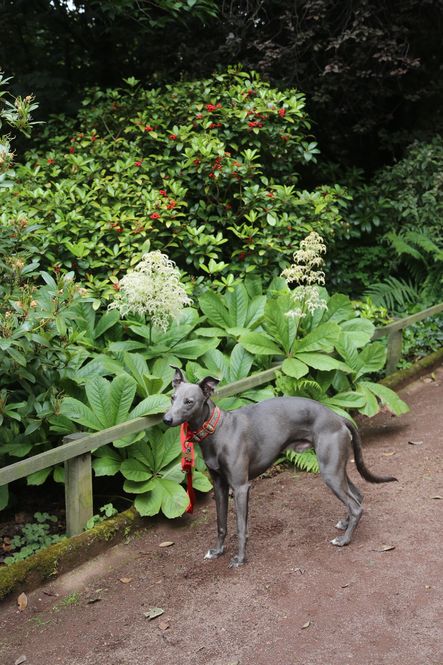 My next jaunt is to the Scottish Highlands and mountainous scenery of Wester Ross, I have even been promised a run on the golden sands at Gairloch so you may see a wee ‘pop up’ piece from me from that neck of the woods; which the Boss assures me is magic and that I’ll love it. Be it sunshine, mist or storm this region I am told is truly the land of rainbows, wild scenery and glorious gardens many of which appear in the ‘Yellow Book’ and the SGS web site.

Well that’s it for now; but remember stay in the shade guys and drink plenty of water when it’s sunny and hot and you are out in the garden. Please also look after my doggy chums in the same way when its hot, whether they are at home or out and about especially in the car. ‘The Team’ got me a blue ‘Cool Coat’ its dreamtime, like walking in an air conditioner - magic and even better I feel like a real ‘dude’ in it. Hee hee.

Mr. Lowry.
With thanks to 'The Team'.