Summer has gone. She slipped off amid two days of the most wet and dreary grey skies. By the time the weather cleared, the last of the fledgeling swallows and their parents had also fled the glen on their long journey to a kinder climate. Over the next two days their northern cousins came swooping about the house and courtyard. It seemed they were checking on the nest sites to ensure no-one was left behind. Their rapid chatter sounded like a Gaelic version of swallow banter.

Time to draw up a list of autumnal tasks, the main one being a mass of pruning-back and thinning-out some of the growth put on by the shrubs in the wild garden over the last couple of years but, especially this year. After the last late frosts in May, azaleas have put up a host of new shoots which are now beginning to be tinged by autumn colours. I shall leave them until last so that I can enjoy their rich bronzes and golds.

I began to thin out at Guelder Rose which had spread out and well as up, crowding out a hydrangea and olearia on one side and a Sudo Magnolia on the other. My new Silky Saw and sharp secateurs came into good use resulting in a heap of branches to haul up the path to the mound at the gable end of the house.

Despite protesting muscles and wet feet, I stood back and felt pleased with the result. I’ve left four stems of the Gelda Rose to see if they will stand up to the wind and the released shrubs look happier with space and light around them.

When I first walked along the main path to tackle this job I saw an unexpected blockage which turned out to be a mature Rowan Tree which had broken off at the root and fallen downhill, completely blocking the path. Its top branches were entangled in a big white Hebe, on the lower side, which was my next job to prune. I’ll need help from Christophe and his chainsaw for the Rowan but, meantime, I will try to thin out the Hebe and cut down the self seeding Escallonias behind it.  Everywhere I look, shrubs are losing their shapes and self-seeded incomers poking up in the wrong places.

Down by the bog garden path the primulas had grown into huge, chunky plants and I see seedlings of Pulvarulenta and Japonica germinating and will take a small fork and tray to scoop them up for repotting.

I came back to the house to find it was half past six and putting the kettle on, awarded myself two scones, warmed up and with a heap of blackcurrant and plum jam.

Daylight closed earlier and even more so on a grey evening, like tonight so I’m happy to drink a potful of tea, let my tingling leg muscles settle down. I’ve not kept on top of the pruning, probably as its my least favourite task and I’m not good at it. The tough exercise and exertion has fired up my blood circulation and chased away the rather gloomy mood I was in at the start of the day.

I shall miss the swallows and house matins banter and chatter but will enjoy the robins taking over with their territorial songs. Onwards towards Autumn. 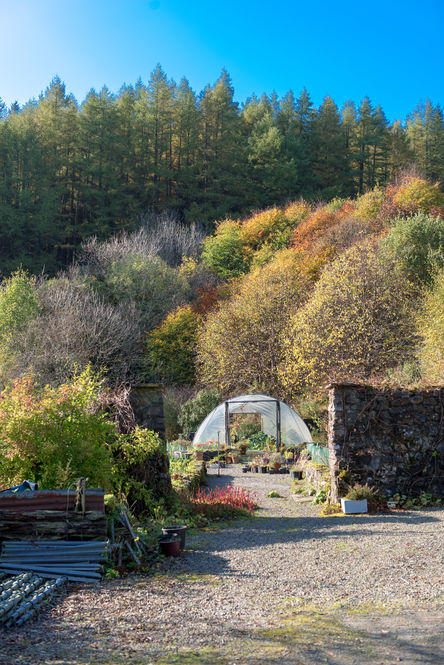