Easing Out of Isolation @ Maolachy Garden in July 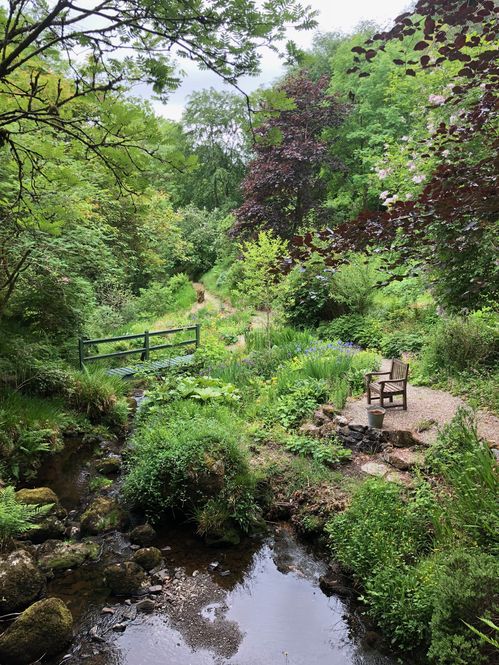 Early morning on July 21st brought a soft rising sun and a blue sky speckled with a few odd shaped clouds.  It was still and cool and looked to be a welcome, fine day.

There were so many self-heal flowers amongst the grass on the front lawn that I couldn't bear to mow them and now the whole area has cut lanes between rafts of purple heads and a few buttercup stems like street lights of yellow.  I know I have given myself a strimming task, once the self-heal flowers have gone to seed, as it’s all too thick for the mower, but worth it to have the bees buzzing, gathering pollen. A Dark Green Fritillary butterfly is so engrossed in sooking out the nectar, alighting closeby and folding its wings to lie on its side, enjoying the warmth of the sun. Few in number and such a beautiful creature.

I look forward to the grandchildren coming at the end of the month when these paths will be fun to run round.  Meanwhile the house-martens have been my companions and joyful company. A nestful of young take their wobbly first flights.  The cheeps and squeaks of delight can’t but make one smile. Their acrobatics are fun to watch as they madly flap their forming wings to gain height and then turn down to swoop down low across the grass twittering away with cries of, “Watch me, Mum!” There is a flurry of alarm as a lone, young buzzard cries out for help to find breakfast. The Martins flock close to the house and courtyard for security and shelter.

Thanks to Scotland's Gardens for letting us open our gardens again and, being slightly off the beaten track, I’ve asked people to phone first. Signs and posters are back out. The first visitors at the weekend enjoyed their wander about as Christophe and I were working on replacing some of the Twenty-Five Steps.  It was nice to hear voices in the garden along with the sound of water in the burn. 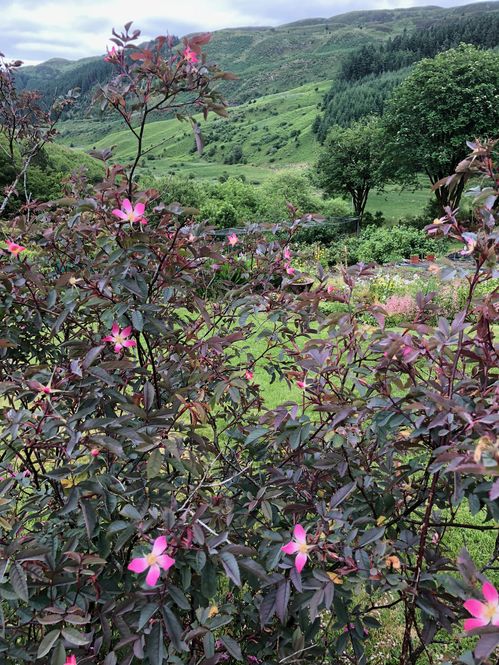 My project that day was to remake the top five steps in order to create a landing space which will provide access to a future path across the bank, above the garden which comes down to the terrace.  Checking the treads and pegs of the rest of the steps, we realised they were not in the best state and decided to replace the whole lot. A satisfying result, but hard work for the Sabbath.  Despite the very cold winds and nasty late frosts which nipped buds and frazzled leaves, there has been a huge burst of new growth which now requires cutting back of overhanging stems.

I am very glad to see The Treacle Tree has produced lots of new leaves but, sadly, think a Sweet Chestnut has had it. The roses have been brilliant, full of blooms and scent spreads out to be caught by the nose as one passes. The herbaceous colours are bright and cheering and down by the pond the huge mop-heads of Primula Florindae stand erect and soft yellow with a few of the dusky orange coloured ones in between. At this time of year it's worth wandering around with a hand fork and tray, scooping up self-seeded primulas, dianthus, geraniums etc to pot up.  Also, in my love of propagating, snipping off the green shoots of shrubs for greenwood cuttings. The Albertine Roses in the courtyard have been a solid cascade of pink blooms, still some more buds to come and almost impossible to dead-head until they finish flowering.

I hope other garden owners are, with sensible precautions, able to open too, so that we might visit each other’s creative efforts. I enjoy looking at different planting ideas and learning which plants are content with more shade and in various dampnesses of soil. A day off is always a good thing.

If you would like to visit the beautiful garden of Maolachy, LochAvich, by Kilmelford, Argyll PA35 1HJ,  please ring Georgina Dalton on 01866 844212.