The following recipe was submitted by garden owners at 101 Greenbank Crescent in Edinburgh. Please arrange a visit to see this fascinating garden, full of various plants, including rhubarb.

We have two plants at the top end of one of our three vegetable beds. Variety is not known, though one comes earlier than the other. Shoots are visible from early February, but don't harvest any for a month yet. It's supposed to need a sunny site but will tolerate semi-shade; ours has to make do with the latter. Plant needs space round about 2 feet as the stalks/leaves spread out. Also needs depth as the root system is extensive; it's not really suitable for container growing. It likes a rich soil; ours is lucky to be near the compost heap, and the bed got a good top dressing of well rotted manure recently.

When taking stalks, you should twist them to detach at the base, rather than cutting, not always easy without damaging adjacent stalks. Don't eat the leaves (poisonous, but O.K. in the compost heap). Don't take anything like half the stalks at a time, and best not to harvest beyond July/August. The stalks start to look a bit ugly then anyway. Peak use is April - May. 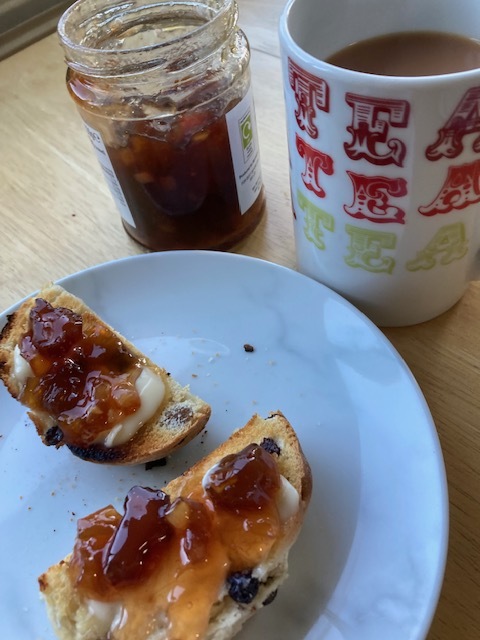 But here's a challenge: some say a plant will crop for up to 10 years and they don't like to be moved. But others say you need to lift, split, and replant every 5-6 years. Ours has had several good years so maybe it's time to do that. We have never had a problem with slugs as some report; that is we have plenty of slugs but they don't go for the rhubarb at all, much preferring our other crops. We make no claim to expertise at all; just saying what has worked.

Jam making from rhubarb is a bit different from other 'fruits' (it is strictly a vegetable) since it is low in pectin. Some recipes specify jam sugar which includes pectin. Last year with a glut of rhubarb, we tried the following odd recipe, which worked. Jam tastes good and keeps O.K. - we are now enjoying it.

Chop cleaned rhubarb into small pieces. Put in a dish with sugar and peel, layer by layer. Leave overnight. Strain off the syrupy liquid which will have formed, and boil that up for about 10 minutes. Pour back over the fruit and leave another 24 hours.

After this time rhubarb and peel should have softened. (I cheated and left it an extra day.) Transfer everything to a preserving pan, bring to simmer, then simmer for about 30 minutes until thick and pulpy. Keep a close watch, and stir occasionally to avoid burning. The recipe does not specify a setting test or target temperature, unlike many jam recipes. Pot as usual.

(adapted from The Penguin Book of Jams, Pickles and Chutneys 1975)