What plants do you use to deck the halls?

A classic Christmas splash of red, the poinsetta originally comes from Mexico. It came to Europe by way of the United States of America, and gets its common name from the then US Minister to Mexico, a J.R. Poinsett. The small shrub that we get in shops is a cultivar of it's parent, a taller more spindly plant.

It is associated with Christmas in both Mexico, and neighbouring Guatemala, and it known as the 'Christmas Eve Flower'.  It is said the original crimson blooms of the poinsetta flourished from the weeds a poor girl brought to the celebration of Jesus' birthday.

Cactus are definitely in vogue at the moment, along with all succulents. It refers to one type of schlumbergera genus: schlumbergera x buckleyi, and is different to a the Thanksgiving and Easter Cactus. It comes from the coastal mountaineous regions of south-east Brazil. It makes a lovely gift for a modern plant lover.

A traditional go-to for Christmas greenery, english ivy Hedera helix, originally stems from a wide belt on central and southern Europe, northern Africa and central-south and Eastern Asia. In pagan Europe, the ivy is known as the female plant to its partner, the male holly plant. 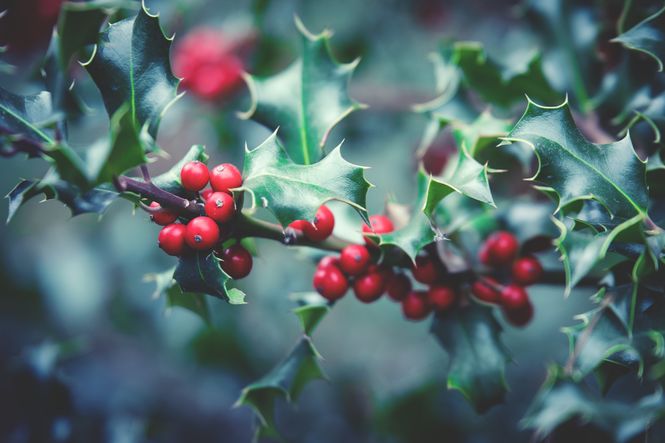 The 'male' partner to the 'female' ivy plant. The common European holly Ilex aquifolium is a thorny evergreen. In Christian symbolism, it represents the thorny crown Jesus wore to the cross and truth.

Mistletoe, Viscum album, is native to the British Isles, as well as much of Europe. It is an obligate hemiparasitic plant, which means it can only survive by taking nutrients from a suitable host, although it is capable of photosynthesis to a certain degree. That is why you will always find mistletoe cowled in the branches of trees, and usually just out of reach. It is a traditional Christmas decoration, usually hung over door frames, to invite couples to kiss.

The Christmas rose is not, as the name might suggest, a rose. It is a variety of Hellebore, Helleborus niger, it is native to mountainous regions in central Europe. It gets it trickster name for the old legend similar to that of the poinsetta. It is said that a young girl was crying in the snowy mountains because she had no present to take to the baby Jesus at Bethleham. From the spot where her tears hit the snow laden soil, the christmas rose sprung.